Indian classical music is unique around the world with its element of improvisation within a structured composition. Some side effects of this music can be a feeling of peacefulness, relaxed breathing and later, an exhilarating effect. Sitar player Tom Griffin started out playing and studying jazz guitar in high school. Tom developed an ardent interest in Indian classical music ten years ago when he was fortunate to meet sitarist Vatsal Dave. He studied with Dave for five years, and now plays sitar with tabla & tanpura for weddings, art openings, and other events. Tom is accompanied by tabla player Jason Taj. Jason started learning tabla at just 12 years of age. He is a student of the "Prince of Tabla," Ustad Tari Khan, who is a torchbearer of the Punjab Gharana. Jason’s capabilities in North Indian music range from semi-classical, to geet, ghazal, folk, and pop genres, played both solo and as accompaniment. Jason says, "I am always open to new ideas and enjoy bringing new and exciting things to the realm of music." Tom is also accompanied by Lauren Rogers on the tanbura and santoor. Lauren, an ESL teacher and former yoga instructor, is a dedicated student of Indian spiritual literature and philosophy. She is a world traveler with plans to visit India one day. Lauren has been playing weddings and events with Tom for two years. 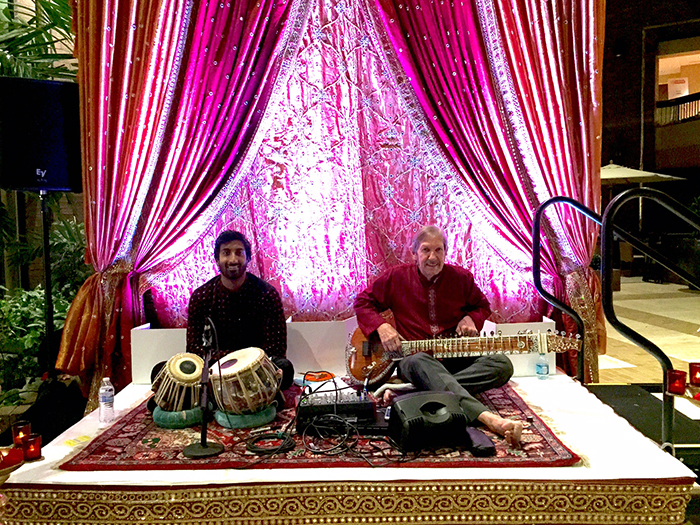