Shoot Low Sheriff is an award winning band based in the north Texas area. Our music is inspired by the classic Texas Swing bands, combining fiddle, horns, guitar and piano to recapture the sounds that swept Southern dancehalls in the 1930s and 40s. People compare us to Asleep at the Wheel, The Hot Club of Cowtown and others, but we really have a sound of our own. We record and perform original music alongside classic songs from the golden era of Bob Wills and Milton Brown. In 2012, the Academy of Western Artists named Shoot Low Sheriff the Western Swing Band of the Year; and in 2013 we won awards for best song and best instrumentalist. We've performed on the Chevy Main Stage at the State Fair of Texas for the past four years. We perform regularly at area festivals like the Cottonwood Arts Fest and Huffhines Art Trails. We've performed civic concerts across north Texas, and were a featured performer at the Lincoln County Cowboy Symposium in Ruidoso, New Mexico last October. Other venues we've performed at include Dan's Silverleaf, Lee Harvey's, the Granada Theater, the Kessler Theater, Fred's Texas Café, Allgood Café, Love & War In Texas, the Sons of Hermann Hall, Pearl's Dancehall and Saloon, and Lola's in the Fort Worth Stockyards. 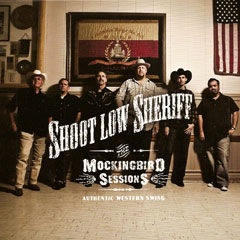