Retro infused with a dash of cocktail chic, this sensational 6 piece band was co-founded by David & Stephanie Brehm, two finalists from the 2009 USA Songwriting Competition for their sexy track, “Red Dress”. Co-writer and lead vocalist STEPHANIE YOUNG BREHM is nothing short of captivating. She commands the stage with an alluring, sultry style that brings a feminine and honest approach to her music. The Dallas Morning News commented Stephanie was “one of the sexiest performers in Dallas.” Co-writer and lead guitarist DAVID L. BREHM developed an appreciation for guitar driven music while listening to the likes of George Benson, Carlos Santana, and Stevie Ray Vaughan. He studied jazz guitar at the University of North Texas and learned enough notes to compose a few of his own. With a repertoire that includes original tunes, as well as an extensive jazz, pop, and latin catalogue, THE BREHMS BAND deliver an electrifying musical experience . 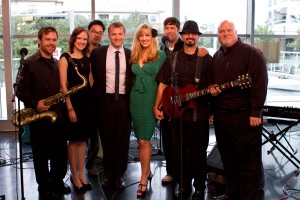