The N'awlins Gumbo Kings is comprised of six extremely accomplished musicians who have known and played with each other in various other configurations for decades. The flawless blending of their talent, styles, and expertise has created a musical experience full of energy and excitement for the band members as well as the audience. New Orleans jazz is some of the happiest and most exciting music in the world, and audiences have consistently responded to the band with the kind of on-your-feet enthusiasm that every band hopes to generate.The N'awlins Gumbo Kings have played to sold out houses at every performance. Their rapid success is a testament to their quality as well as the enduring popularity of the music they play. Co-leaders Mike, Steve, Brad and their band are committed to carrying on the legacy of New Orleans jazz. If you are a fan of New Orleans music, a performance by the N'awlins Gumbo Kings is an experience you don't want to miss. 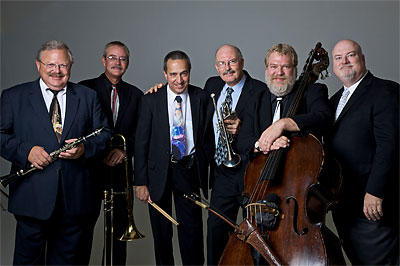